Stories have a way of spiraling out, fracturing into new tales before the first one’s even finished. You could say that happened to the story of George Yuhasz, author, grandfather, former Special Agent-turned Private Investigator, and current Champion Hills member.

Stories have a way of spiraling out, fracturing into new tales before the first one’s even finished. You could say that happened to the story of George Yuhasz, author, grandfather, former Special Agent, and current Champion Hills member.

“Creating something from the heart and soul that makes a difference in someone’s life makes me joyful,” George says. “Writing stories helps me do that.”

George self-published his first book, Imagine That: The Magic of the Mysterious Lights, in 2019. Inspiration can come from anywhere, but for George, the path to the finished product started at – where else? – his granddaughter’s birthday party.

As George and his wife, Susan, watched seven-year-old Evelyn and her friends light up at the appearance of a princess (a performer in a Rapunzel costume), something ignited in George’s mind, as well.

“I watched them dance and play with Rapunzel, never for a moment doubting they were princesses in that moment, too,” George recalls. With that moment swirling in his mind, George’s thoughts turned to his own grandmother’s “profound gift” for storytelling: "I realized I wanted to carry on her legacy and tell… write…a story for Evelyn.”

“I thought he was going to do a handwritten, hand-illustrated book for [Evelyn],” Susan says. Even she didn’t know his plans to self-publish – “though, with his talent for follow-through,” she says, “I shouldn’t have been surprised.”

Awakening the “Sensitive and Creative Side” of a Career Special Agent

To write his first book, George leaned on his career in intelligence to create a nuanced world down to the smallest detail. He borrowed details from his life, his grandmother’s life, and even Evelyn’s life – including her likeness and that of her cat, Frodo – to flesh out a story that would feel personal while connecting with any reader.

“Evelyn is a little girl who lives with her parents and brother in a house with a big backyard,” reads the book’s synopsis. “On nights when the sky is filled with brightly shining stars, she loves to go outside before bed to see the Milky Way and the Big Dipper and dream about the planets. But Evelyn has a secret: She is able to see flashes of light streaking across the night sky that no one else can see. And she'll soon learn that her secret is actually a wonderful gift!” 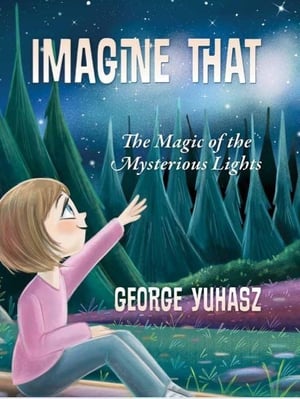 When the book was published last year, almost two years to the day from Evelyn’s party, her reaction made him think of the work in bigger terms. “It was a beautiful, tender moment for us all,” he remembers. “She was thrilled and proceeded to read it aloud. I know it is something that she will treasure and love forever.”

Though it was originally intended as a gift from grandfather to granddaughter, encouragement from his family and friends – including Evelyn – led George to bring Imagine That to a broader audience. George began reading at local libraries and coffee houses, selling his work online, submitting his work to publishing competitions, posting on social media, and even hosting a special reading for Champion Hills’ Camp Champ Kid’s Camp.

Imagine That was awarded Outstanding Children’s Fiction Illustrated at the 2019 Independent Author Network Book of the Year Awards, where it was also selected as a finalist for the Outstanding Children’s Juvenile Fiction Award. George has since received the indieB.R.A.G Medallion Honoree Award for Writing Excellence, Winner/Gold Medalist Children's Books Ages 6-9 from the Wishing Shelf Awards, as well as award recognition from the Royal Dragonfly Book Awards in the U.K.

“Awakening my sensitive and creative side has been challenging,” George says, “but very powerful and enlightening. This whole journey has led me beyond any expectations … I am reconnecting with my old friends and colleagues. And even better, spreading joy, inspiration, and imagination in children.”

Champion Hills, a premier private Club in Hendersonville is the employer of nearly 100 employees – some seasonal, some full-time; some ...
Learn More

Not everyone gets to use their love of golf like Champion Hills members Scotty Wood and Brian Fitzgerald. As panelists for Golf Digest (better known ...
Learn More